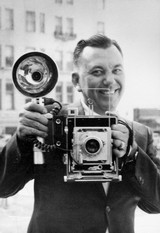 Memphis Heritage is pleased to be able to present the work of Don Newman. During the 1940’s 50’s and 60’s Newman photographed Memphis, especially the downtown area, using an 8″ x 10″ view camera.

Newman was a native Memphian. Born in 1919, he graduated from Tech High School in 1937 and began working for the commercial and industrial photographer George Haley shortly after graduation. In 1939 Don married Bertha Mae to whom he was married until he passed away in 1994.

Newman worked briefly as a photographer for the Memphis Engraving Company, and then for Frank Hitchings; who he eventually bought out with Jack Fury after Hitching’s retirement. Many of the photographs in the Newman archive were produced for assignments or jobs, however a large number were made to satisfy his personal curiosity and interests.

The photographs are black and white, and the scenes are familiar to Memphians born after Newman’s time, in a detached way more reminiscent of déjà vu than actual memory. The streets and intersections are recognizable, though it might take a minute to be oriented and realize that you’re looking north up Main at Madison, at the four-story Clarks Shoe Store, which is no longer there and whose former home is now only two stories tall, and at the Kress Building, which is still there, though now part of the SpringHill Suites hotel.

“His work was all by hand … He took pictures, developed the film and did the printing himself. He had a good life. It was an interesting life and he liked that.” – Bertha Newman

The equipment – an 80-pound tripod, 25-pound view camera and 10 film holders, each the size of a large briefcase – would be carried around town. A photographer in 1950 in the middle of a Memphis summer had his work cut out for him.

However, the payoff was worth it as Memphis is seen in all her glory, with stately architecture and bustling streets. Mrs. Newman said her husband was distraught over losing such iconic buildings as Union Station and the Cossitt Library on Front. To that end, Newman’s images are used today not only to decorate an office or study, but also as education.

For more than four decades, a man of great aspirations captured a city with a great ambition. If a picture is worth a thousand words, then Don Newman’s photographs give us a history book’s worth of tales. They are the stories of where people shopped, what they wore, the cars they drove and spaces where they worked, ate and played.

Memphis Heritage mission is to educate and coordinate individuals and groups to save, improve, reuse, and maintain architecturally and historically significant buildings, neighborhoods, parks, and cultural artifacts of Shelby County, Tennessee. Read more...